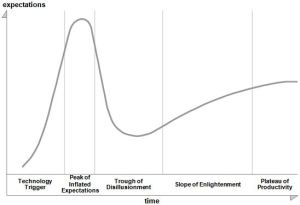 I’m no market analyst, but I have to admit that among my first early reactions to noticing all the BD buzz afoot back in 2010 was to wonder: exactly who besides the odd Google, Amazon, Facebook or Twitter with their godzillabytes datapile cultures would need this stuff for real? I’m exaggerating, since I can see plenty of research opportunities within BioTech, communications analysis, financial, and other sectors as possibilities. But the real question is whether the average corporate data heap’s need for BD and NoSQL is actual, or just hype. END_OF_DOCUMENT_TOKEN_TO_BE_REPLACED

Here’s something neat! Been wondering what the general differences are with MapReduce coding as compared to SQL queries? Rick Osborne, a Web developer and blogger, has a neat graphic depicting just that. The specific databases he looks at are MySQL and MongoDB. But on the relational database front, the SQL looks to be ANSI, and would be rendered identically in Oracle. END_OF_DOCUMENT_TOKEN_TO_BE_REPLACED

“Data doesn’t invade people’s lives. Lack of control over how it is used does.”
~ Alistair Croll

I came across this quote, sensible as it is, while the gun control debate is re-energized due to current tragedies in the news, and can’t help but see the parallels with ‘guns don’t kill people’. END_OF_DOCUMENT_TOKEN_TO_BE_REPLACED ∞