Relational database design has strong roots within Set Theory, as can be seen in the seminal work of E.F. Codd more than 40 years ago. Most people recall encountering Venn diagrams during their school days, a pictorial excursion into this realm. Codd codified his relational ideals into a series of well-known rules, which represent an extreme case, not taking account of the often necessary pragmatic or performance reasons for selective denormalization. But his principles are still instructive and serve as a starting point for designing business schemas.

SQL incorporates set operations in the various types of joins and anti-joins it allows, and also directly between tables or SELECT constructs via the operators: UNION, UNION ALL, MINUS, and INTERSECT plus IN and NOT IN. This post will explore this last group, saving joining as a future topic. Another closely related topic is the problem of finding and removing duplicated data within a set or table. This also deserves it’s own future post. 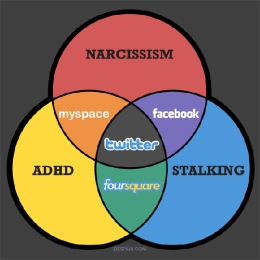 The basic “pretzel” shape illustrates the kinds of relationships possible between three interconnected sets. In the image at left, Facebook users are deemed to not be suffering from ADHD, although they are seen as prone to narcissism and stalking behaviors (purple). Foursquare people are happily more altruistic and less self-absorbed, but unfortunately they tend to exhibit attentiveness problems (green). The intersection of all three afflicted populations, those suffering from ADHD, Narcissism, and Stalking, is the sole province of Twitter users. (Not my opinions entirely, but can you really argue with science?) If we let A = the Narcissists, B = the Stalkers, and C = the ADHD people, then we can make the following subset formulations: 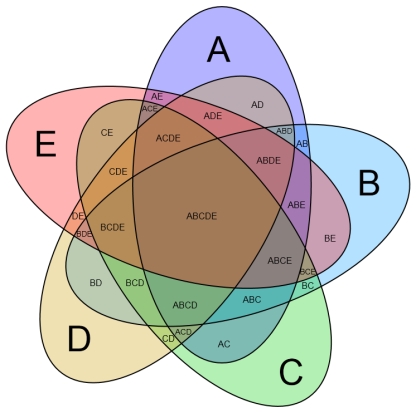 Things get more complicated quickly as the number of sets increase, as evidenced by the image at right depicting the possible combinations of five different sets. There are 31 distinct subset combinations shown, or (2**5)-1.

w h i t e s p a c e
If the empty set is included, meaning neither A nor B nor C nor D nor E, then we have 32 different possibilities.

The basic method to obtain rows from two similar tables is via the UNION verb. I say ‘basic’ because unlike with a join, you don’t concern yourself with downsizing the Cartesian product of the two tables by using join conditions such as foreign keys or other filters. At most you will have one output row for each table row. You just filter with the WHERE clause, if needed. I say ‘similar’ because you want the set of columns chosen from both tables in the union to match up. In the example below, you’ll see they needn’t be identical, as I’ve constructed a virtual column containing the literal ‘ –FREE SPACE– ‘ to match the segment info from the SYS.DBA_EXTENTS table. And I’ve done something similar for the absent EXTENT_ID column. What this query is doing is inspecting the system data dictionary to map out chunks of either free or utilized space, within a chosen tablespace. If utilized, the chunk is identified by it’s schema, segment name, and type; if unused it is simply labelled as free. The chunks are sorted by size across the union, in other words, independently of whether they are used or free.
w h i t e s p a c e

UNION vs. UNION ALL

When two sets are disjoint, meaning that they share no common elements, taking the union of them does not involve any second pass or extra work to eliminate duplications. That was the case with the query above gathering extents and free space chunks. When queries consider shared common rows within tables, duplicates can become an issue. This is the difference between UNION and UNION ALL: UNION will always eliminate duplicates, while UNION ALL allows them to be retrieved in the result set. This can have a performance impact if there are large tables involved and/or large numbers of tables. UNION ALL will be cheaper; it is necessary to weigh the business need for removing duplicates.

Let’s consider two tables of common given names, one from France and the other from the U.S. The tables have ranking information according to current popularity trends. Each contain the top 100 female and top 100 male given names for their countries of origin. I sourced this data on the web, and it was claimed to be accurate for 2011. I loaded them as external tables and then processed them into regular tables along with ranking information; the original frequency counts were removed for present purposes. We’ll explore the commonality between these two tables.
view French given names
view U.S. given names

As can be seen from the UNION count, there are 33 of the names which are duplicated somewhere among the French and U.S. English names. UNION ALL, however, counts everything. If you’re curious about the shared names between cultures, they will surface below. But first I want to give an inkling about the performance hit taken for UNION with non-disjoint tables. Because the data amounts (rowcounts) are so low, there is not a dramatic separation between the autotrace stats for the UNION vs. UNION ALL cases in our given names examples (button below right). But it is already clear that an extra step is added to the plan for UNION, and that higher costs are incurred in the Costs (CPU%) column. When serious quantities of data are involved, these add up. Moral of the story is to use UNION consciously when needed, and to rely upon UNION ALL by default.

Now, back to tracking down those intercultural popular names! Our first take, illustrating the INTERSECT verb, might be this:
w h i t e s p a c e

So, these thirty names occur in both the French and U.S. lists. This result doesn’t answer every question though, since we might wish to know why only 30 duplicated names have shown up common to both French and American English. Why aren’t there 33 names in the intersection? The following query reveals that the American English list itself contains three names which appear twice because they are popular for both genders.
w h i t e s p a c e

This result list produces both types of duplicates: the pairs of names shared across languages (black) as suggested by the original INTERSECT query above; and the pairs of names duplicated within the same language due to gender (red), including JORDAN, which is a hybrid of both conditions.

The WITH … AS construct allows us to obtain the supporting data for each name, like RANKING and GENDER. Look here for a more complex example of WITH … AS code. And, if you’re interested in contrasting recent baby naming trends in Britain and Wales against those in either the U.S. or France, check out this Guardian study.

Finally, when we want to find only the rows within a given table which are not also found in some other table, a useful verb is MINUS. In our original pretzel graphic, the Myspace users (orange) plus the non-social-media ADHD-ers (yellow) represent the set ADHD MINUS the set of Stalkers. For our SQL example, imagine a replication scenario involving twin databases across a database link. We wish to check that all of the objects within a certain schema have been copied across to the same schema within the secondary database. The following snippet will in fact check for unmatched objects in both directions across the database link.
w h i t e s p a c e

By stolzyblog in Featured, SQL Tips on February 18, 2015.
← More About PIVOT Queries Unpivoting Spreadsheets into Oracle →