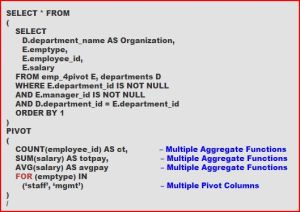 An earlier post introduced the PIVOT feature in Oracle’s 11g2 SQL, and described the motivation for pivoting. This one explores a few more complex ways to use pivot queries. We’ll look at:

within the same SQL statement and we’ll see a few errors which commonly arise when building more complex pivot queries like these. Finally, we’ll consider: why would one have a need to UNPIVOT? END_OF_DOCUMENT_TOKEN_TO_BE_REPLACED

Back around the era of Oracle 6 or 7, I had an intuition that a certain type of query could be written within the limits of SQL*Plus syntax, but wasn’t quite clear as to how. I was doing some ad-hoc DBA work for a development database once a week or so, and wished to get a handle on who was doing what how frequently in terms of object creation. I envisioned a tabular matrix tallying kinds of objects by user with the aim of watching the changes over time. After doing some legwork exploring the sys.obj$ table and hitting upon using DECODE to trap specific object/user pairs into desired columns, I came up with this: END_OF_DOCUMENT_TOKEN_TO_BE_REPLACED