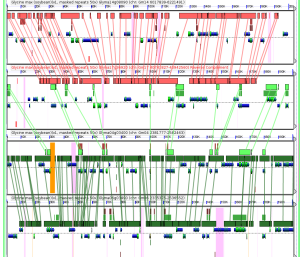 Plenty of swirling news items connected with large-scale data efforts in Health research of late. There’s a wild west nobody-in-charge feeling to some of it. This recent NY Times piece describes a process in which centralized data collectors who were early to the game and on top of their lobbying and bill tailoring skills are reaping massive rewards, but those providers who bought their pitch are having a harder time realizing the benefits. The article claims that Allscripts, a Healthcare Service IT provider, boarded the bus at the right moment when Obama’s 2009 stimulus package had incorporated into it incentives to encourage the electronic standardization and sharing of medical data.

You could deflect concerns that this might reflect poorly on the analytic BD promise in healthcare in general by pointing to the pitfalls of government funding as opposed to purer entrepreneurship. But I’m reminded of the wild enthusiasm in the air around the time of completion of the competing Human Genome Projects about a dozen years ago. Long forgotten hyperboles of diagnostic promise and new cures have been replaced by more sober assessments, a decade after the first completed human sequencing.

Not long ago I looked into the potential for using my own personal genome data as grist for a database/analytics research post. You may know of the 23 and Me project, which for the current price of $99, allows you to submit your own DNA sample, have it processed and then made available as a download along with various health recommendations and ancestry tidbits. The reviews are mixed however, as to the efficacy of the service. Some of their ‘research‘ results may be of interest, and the company is trying to gather sufficient subscribers (one million) to build an effective sample genotype database for health trend spotting. But the proviso which turned me away for now is that they are not technologically able at present to provide a full gene sequence; at least not affordably. (I was envisioning tossing that 3-billion byte string into an Oracle database and exploring text analyses tools.) Here’s a good place to get an overview of the differences between gene mapping and sequencing, if you like.

Another area, usually of about as much interest to data science techies as knitting, is that of the ethical impact of BD health initiatives. Who owns your health data? Will you be able to vote on it’s destinations and usage? And can ways be worked out to reliably anonymize your data when they are blended into larger statistical studies? It shouldn’t amaze me by now that there are enthusiasts aplenty who begrudge people this new intrusion upon their privacy. Along with advocates, as well.

Ending this ramble on an upbeat note though, I’d like to pass along this nicely done and well thought out highly interactive graphic: a heat map mortality study comparing 1990 and 2010 data. This is from the days before Big Data and it’s scale does not approach the petabyte level. But imagine what could be, if political and funding and standardization issues could be overcome. Novel visual presentation ideas are a bright spot within the BD landscape.