Medical Advances via the Semantic Web

I attended a product demo given by IO Informatics, the semantic health care analytics company, last month. The most intriguing service showcased was their Sentient Server and Knowledge Explorer tool. It can integrate with Oracle 11g (and other databases such as MySQL) as the backend data warehouse supporting typically billions of medical assertions.

The innovative aspect is that this data can then be combined with remote loosely structured ‘Big Data’ such as genomics and proteomics data stores, streamed physiological monitor data from patients, and latest clinical trial updates. Non-programmer subject matter experts, such as medical personnel, can manipulate the entire heterogeneous data mass using visual object techniques, and can set up theoretical diagnosis or treatment scenarios, or pose questions with an intuitive and graphic querying tool, known as SparQL. You can orient yourself by viewing these walkthroughs by company principal, semanticist Erich Gombocz: (1) an immune system organ rejection use case, and (2) lecture slides detailing how the entire suite works.

I asked about the general applicability for the tool suite to other domains, such as finance, legal casework, or marketing. IO Informatics claims it can be adapted with the right SMEs, but their own staff is currently focused on health care and all current customers are pharmaceutical outfits. 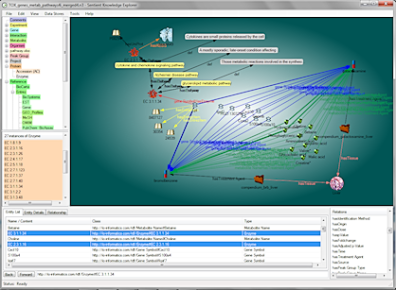 The semantic web is an open-source concept advocated by Tim Berners-Lee and W3C which aims to link networked web elements ‘semantically’ such that “machines can read the documents’ relationships”, relieving humans of excess workload. It uses metadata markup extensions to indicate semantic relationships between web elements, RDFs to model semantic enities, and specialized semantic languages, such as OWL, to expand and unify the meta descriptions which can be formulated about underlying content. Unlike conventional relational databases, semantic data stores are designed around the notion of containing and querying triplets, but in practice RDBMSs like Oracle are pressed into service. Oracle 11g has developer hooks for semantic techniques and OWL storage triplets, which can be reviewed here and here. There’s a PL/SQL package called SEM_APIS which effects Oracle’s semantic capabilities, but annoyingly it is not bundled with the basic database release. It’s only available with the Oracle Spatial option! Oracle is an IO Informatics business partner.
w h i t e s p a c e

How Valid is the Promise?

The semantic web idea is not without it’s detractors or even ridiculers. The derogatory label ‘metacrap’ has entered the lexicon. There are two basic areas of contention: whether web content elements can usefully be abstracted in the absence of human judgement without critical loss of meaning, and whether any coding system can do so unambiguously. (Modelers have their pet perspectives.) These concerns speak to the richness of semantics in natural language and the cultural resistance to reductionist agendas in general. Perhaps it is more worthwhile to ascend from these details to a higher vantage point. In the first of the videos below, a medical expert and BD advocate lays out his take on improving genomic analytics to envision how health care will function around 2040. In the second video, a recent Strata conference panel on Big Data and health care discusses privacy issues and ideas for reclaiming ownership of personal medical data in the near future, and also algorithmic agents which would watch our health indicators and make recommendations. Tim O’Reilly makes an interesting point, around 22:58, regarding the need to gauge the motivations of the algorithm designers: not infrequently the profit motive will outpace the accuracy motive, and how do we build in interactive judgement tools?
w h i t e s p a c e

By stolzyblog in Big Data on July 9, 2013.
← Business BD vs. Science BD Will the real Data Scientist please stand up? →